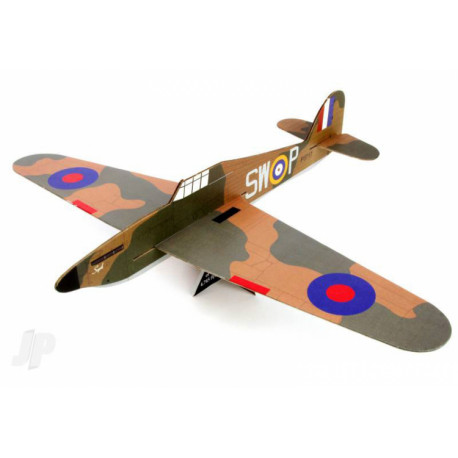 A true veteran of the Battle of Britain; the Hurricane Mk I was built in 1940 by Hawker Aircraft. As opposed to the Spitfire built from steel; the Hurricane Mk I was built out of wood. This made it far quicker to build; so much so that it outnumbered the Spitfire two to one at the outbreak of the WW2. Its' wings would have had invasion stripes during WW2 to ensure that it wasn't mistakenly shot down by the British. It featured a Rolls-Royce Merlin engine which allowed for a maximum speed of 340mph. It could climb to a maximum altitude of 36,000 feet, with an incredible power (for it's time) of 1,185hp! The rate of climb was 2,780 feet per minute.

Prestige Models are thrilled to introduce you to this accurate scale flying balsa model of the fabulously ferocious WW2 fighter - Hurricane Mk I. An exemplary real-size example of this WW2 fighter is based at Shuttleworth for all to visit.

The Hurricane MkI P3717 was taken on charge by the Royal Air-force in June 1940 and was delivered to the newly formed 253rd Squadron at KirtO_n-in-Lindsey on 13th July 1940. Just three days later on the 16th July 1940, a Polish Pilot Officer, W. Samolinski, reported to duty at the Squadron to fly this iconic fighter.

Less than seven weeks later, on the 30th August 1940, the P3717 was one of the thirteen aircraft participating in a squadron scramble at 10.50am and ordered to patrol over Maidstone ready to face any threat to its Kenley base. When no attack on Kenley materialized, the 253rd Squadron were vectored towards Brighton. It seems that a dogfight between elements of the 253rd Squadron and aircraft of Albert Kesselring's Luftflotte 2 broke out over Redhill in Surrey. The P3717, flown by W. Samolinski, was involved in this dogfight and W. Samolinski claimed and was officially credited for the destruction of a German Messerschmitt BF 110 in this action.

The P3717 made it back to Kenley but not before one of the enemy aircraft had damaged it to such an extent that it had to be returned to the manufacturers for significant repairs. These repairs took time and once complete, the P3717 was reissued to the 257th Squadron for further service. The P3717 was later returned for major works a second time and modified to Mk2 standard after which it was sent to Russia from where it was recovered in the late 1990.

The restoration to a flying condition has taken over 10 years to accomplish and was only completed in March 2017.